What You Need to Know About Emerald Ash Borer

What is an Emerald Ash Borer? 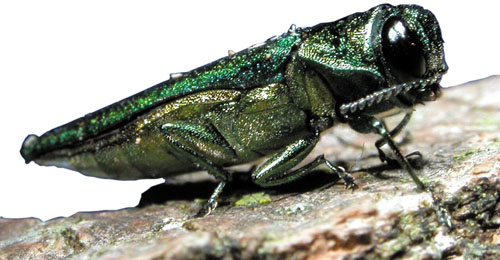 Scientifically, it is named Agrilus planipennis. To the everyday person, the name is emerald ash borer. EAB is short for Emerald Ash Borer. The EAB is a green jewel-colored beetle that feeds on ash tree species. They reproduce inside the bark. EABs lay eggs in bark crevices, specifically on ash trees, and larvae feed underneath the bark of ash trees. These larvae take up to two years to turn into adults. This species was not very destructive in its land of origination. However, it's been noticed that outside its native range, it is an invasive species and is highly destructive to ash trees.

Adult EABs are typically bright metallic green and about 8.5 millimeters (0.33 in) long and 1.6 millimeters (0.063 in) wide. They do have one characteristic that makes them unique. EAB is the sole species in North America of it's kind with a bright red upper abdomen when viewed with the wings and elytra spread.

A visual look at the Emerald Ash Borer

A video created by the Natural Resources division of Canada illustrates what is covered in this article.

Where did Emerald Ash Borer come from?

EAB is native to China, eastern Asia, eastern Russia, northern China, Japan, and Korea. Before June of 2002, it had never been found in North America. But EAB was discovered near Detroit, Michigan in the summer of 2002. It is believed to have arrived on solid wood packing material carried in cargo ships or airplanes that originated in Asia.

Why should I care about Emerald Ash Borer?

Minnesota has the largest ash tree population in the United States. And ash trees lack the ability to defend themselves against these insects. Without insecticides the ash trees will become infected and die. And trees are integral to a healthy ecosystem. As they provide pollution reduction and stormwater retention.

Trees have the unique ability to remove air pollution from the air. Which is why they are often referred to as ‘Living Air Purifiers’. The uptake of pollutants occurs through the leaf stomata (“pores” on the outer “skin” layers of the leaf). Once inside the leaf, the gasses diffuse and are absorbed by water films to form acids.

Trees also provide an amazing service when it comes to stormwater retention. After a rainfall, the leaves and bark of a tree retain a huge amount of water.  Some of this moisture evaporates and some slowly reaches the ground. Depending on the size and species, a single tree may store 100 gallons of rainfall. After about one to two inches of rainfall, it reaches saturation. Multiply this by the number of trees in a community and the redistribution of rainfall is significant. This savings can be quantified--leading to smaller drainage and retention systems.

The loss of trees can have significant economic impacts as well. The cost of removing and replacing just a single tree can cost hundreds or thousands of dollars. Again, multiply that by hundreds of millions of trees and there is a hefty price tag to pay. Slowing the spread of EAB can mean that a city can spend $1M a year on ash tree removal for eight years. Instead of spending $8M in one year. Spreading the costs over time is easier on a city’s budget and its taxpayers. Plus, spreading the costs over time will buy time for science and research to catch up. More and more is being learned about EAB and its weaknesses. If scientists can find a remedy, the ash tree species may be saved.

Is Emerald Ash Borer in my city?

As of September 2017, the following Minnesota counties have been placed on the state’s quarantine list, which aims to help slow down the spread of EAB. Those counties include:

How can I identify an ash tree in my yard?

There are four species of ash trees that can be attacked by EAB: green, white, black and blue ash. Mountain ash, another species of ash tree, is not affected by EAB. To date, EAB has not attacked other tree species in North America. To better help identify an Ash tree, look for these characteristics:

Ash trees have opposite branching. Which is where branches are directly across from each other and not staggered. Keep in mind limbs may die or break off, so not every branch will have an opposite mate. Also, branches are gray to brown in color and do not have a waxy coating.

Ash leaves are compound and composed of 5-11 leaflets. The leaf margins may be smooth or toothed with a single bud at the end of the branch. (The only other oppositely sided tree with compound leaves is the boxelder, which is sometimes mistaken for an ash tree.)

When seeds are present on trees they are dry, oar-shaped samaras. They usually occur in clusters and hang on the tree until late fall or early winter.

How can I detect Emerald Ash Borer?

EAB kills ash trees by burrowing into a tree and feeding on its nutrients. The pests lay larva in the bark and can reproduce and spread at an incredibly fast rate. It can be hard to detect the pest in the early stages of infestation, but here are symptoms and signs of EAB:

Larvae or adults: Larvae are found feeding beneath the bark and are cream-colored. They are slightly flattened and have pincher-like appendages at their abdomen. The adult beetle has a shiny emerald or coppery green-colored body. It’s large eyes are kidney-shaped and are bronze or black. The body is narrow (3-3.5mm wide) and about 7 to 8mm in length.

Epicormic Shoots: When the tree is under stress, these shoots originate from the trunk. They can sometimes be found in the tree crown and on larger branches. Not all trees attacked by EAB develop epicormic shoots. But under the right conditions, the shoots can grow rapidly and quickly. They are also called suckers, water sprouts, or witches brooms.

Woodpeckers: The birds feed on the larvae that are under the bark. If there is an increase in woodpecker activity, take notice

S-shaped tunnels under the bark: When larva feeds under the bark, it makes an S-shaped path as it moves up or down the tree. You can tell which way it moves as the larva gets bigger, so does the width of its path. 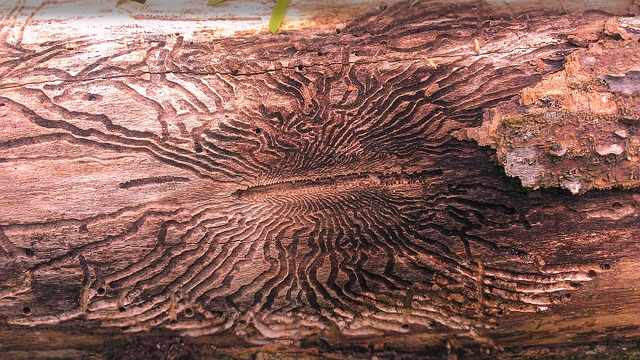 Branches dying from the top down: Feeding by the beetles eventually kills branches. As branches die, the foliage turns yellow, wilts and falls off leaving bare branches.

Vertical bark splits: Bark deformities and cracks are common on the trunk and branches of infested trees.

Leaf Notches: Adult beetles feed on ash leaves and cut notches on the side of the leaf. When beetle populations are high, defoliation will be noticeable.

Drought and tree injury can also cause some of the symptoms noted above.

How does Emerald Ash Borer spread? 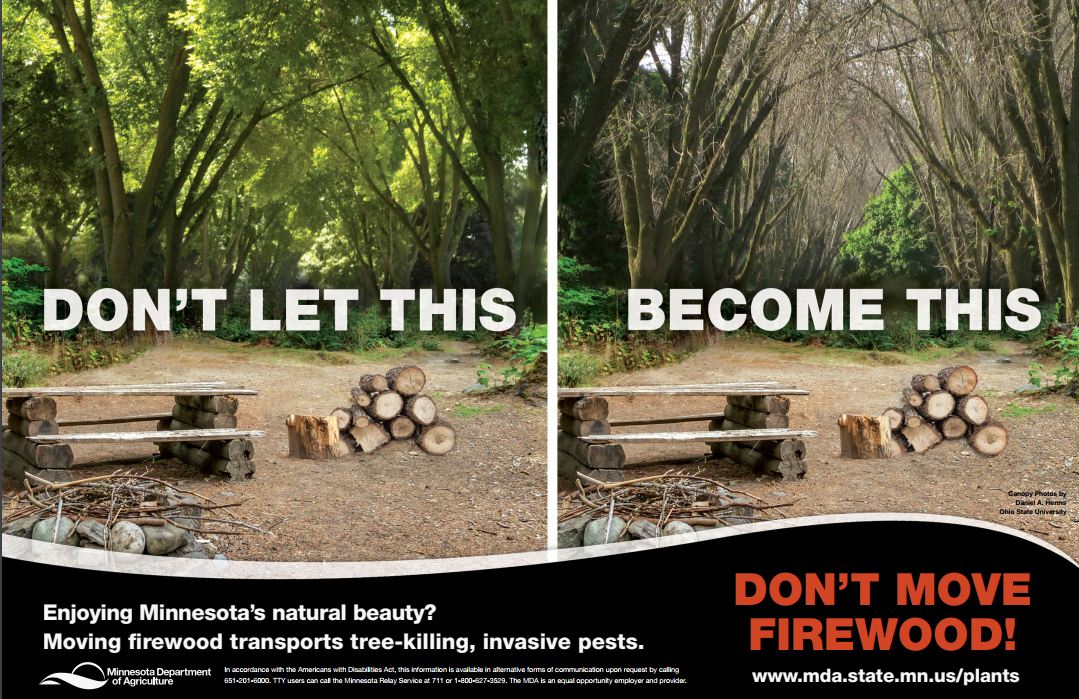 Naturally, the adult beetle can fly short distances. On occasion, a long-distance flight will occur with the right conditions. But typically, EAB is spread by human transport of firewood. It is also transported through ash materials harboring the live emerald ash borers.

How can I help prevent the spread of Emerald Ash Borer?

It is crucial to not remove any of the following items from infected and quarantined areas:

EAB is easily transported in dead ash logs and firewood. Despite the quarantines that exist, it appears the removal of wood is the top cause for the rapid spread.

What should I do if I discover a diseased tree?

Minnesotans can report an infested tree to the Arrest the Pest Hotline at This email address is being protected from spambots. You need JavaScript enabled to view it. or 888-545-6684.

All other states and Canada, go to emeraldashborer.info and take a peek at its “Where to Call if You Suspect Emerald Ash Borer” page.

Also, you can contact your local arborist and tree care company.

Precision Landscape & Tree is available to help in the Twin Cities.  Or you can search registered tree care companies.

A healthy tree that is controlled with insecticides, may be able to survive an EAB attack. If the leaf canopy has already sustained more than 30-50% loss, it is probably too late to the save the tree.

The damage of EAB is progressive. As more insects develop, infestation becomes more visible. When EAB first becomes established, it is usually low in numbers and difficult to detect. But as populations build, external evidence of infestation may be present. As visible symptoms increase, it is often too late as EAB populations explode. This accelerates the damage and it is not uncommon for trees to die within a couple of years.

Can I treat ash trees myself?

Options are available for homeowners to treat small ash trees. But pesticide applications must be done with great care. For large trees, you should certainly get in contact with a licensed professional. Also, you should get in touch with your city or county forester. Local requirements or prohibitions may exist for the treatment of EAB.

What treatments can be used to control Emerald Ash Borer?

In general, there are four control approaches considered for use in the management of EAB:

Insecticides can effectively and consistently protect ash trees from EAB. Outside factors will limit the insecticides success rate. Drought, for example, will inhibit the trees ability to transport the insecticides. Additionally, side effects of insecticide use are possible.

In Asia, where the ash borer is native there are controls at work. Specifically, there are various species of parasitic wasps that feast on the EAB. These wasps can work to limit the EAB so that it rarely causes damage.

Federal agencies are working to identify parasites and introduce them into North America. A few natural enemies have been released in EAB outbreak areas. And the parasites have proved capable of establishing itself, and reproducing.

As a test, three wasp species were released in Minnesota. Two of the species attacked the larval stage of EAB under the bark; the other species kills EAB eggs. The wasps are small and do not harm humans. Currently, only preliminary information is available. In a few years, a better understanding of how much potential these natural enemies have will be known.

Can Emerald Ash Borer be eradicated?

In the first few years after EAB was detected in Michigan, efforts were made to eradicate it. These efforts involved removal of all ash trees near the known area of infestation. Plus widescale use of insecticides on ash trees within that vicinity. The efforts were unsuccessful and abandoned after spending large sums of money. Now, with the spread of EAB across many states and into Canada, eradication efforts would seem futile.

Cold temperatures may have an effect on EAB, but it is unlikely that extinction will take place. A cold period must be sustained for consecutive days to impact the larvae who are residing in trees. The United States Forest Service estimates at a temperature of -30°F, cold mortality may delay the increase of EAB, and EAB should still be expected.

Cold temperatures at other times of the year may affect EAB. Warm spells in late winter and spring, followed by abrupt freezing, is not uncommon. When this occurs, ash leaves can freeze, eliminating the food source of EAB. Additionally, when adult beetles emerge from trees in the spring and there is cold surge, they may be killed from the abrupt temperature change.

Below are valuable resources and helpful links about Emerald Ash Borer.