The Benefits Of Mulching Around Your Trees

Mulching around trees not only gives your landscape a sharper, more pleasing appearance, but it’s also beneficial to the health of your trees as well.

When choosing mulch for your yard, organic mulch is always a better alternative to inorganic mulches, such as fabric, plastic, or rubber. Organic mulches include any material of natural origin that decomposes naturally, such as bark chips, grass clippings, straw, leaves, compost, rice hulls, sawdust, or grape pomace. Inorganic mulches are more cost-effective because they don’t decompose, but they won’t offer all of the benefits that an organic mulch will.

Mulch helps to reduce the level of moisture that evaporates from the soil. Mulch can retain up to 80% of added moisture to the soil. This is especially important if you live in a dry climate because it helps to conserve water. When you keep the soil protected from direct sunlight, it will lose less water. Also, organic mulches soften the impact of raindrops so that water can effectively permeate the soil.

Fluctuations in temperature can prohibit and slow tree growth. Mulch acts as a constant insulator for trees by helping to keep the soil warm in winter and cool in summer, thus helping to control major temperature changes and allowing for better growth. Ground-insulating mulches are espe­cially useful in keeping the roots of newly planted trees and shrubs growing as long as possible and preventing the soil beneath evergreens from freezing so that their roots can absorb moisture in winter.

Soil compaction occurs when soil particles are pressed together, reducing the pore space between them and resulting in denser soil. This makes it difficult for the soil to infiltrate and drain water, which consequently affects the health of the tree. Mulches protect soils from wind, water, traffic-induced erosion, and compaction that directly contribute to root stress and poor plant health. Spreading a thick layer of organic mulch will reduce soil compaction and protect the tree. 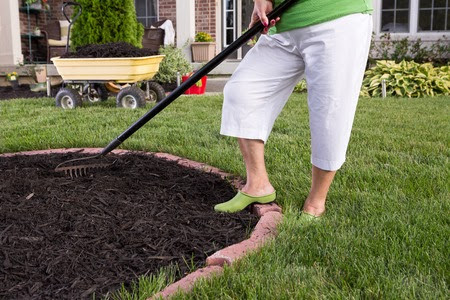 Weeds are invasive and can rob your other plants of water, nutrients, and sunlight. To germinate and grow, weeds need sunlight. To control weed growth, spread a thick, two- to three-inch layer of mulch over the soil. This will block sunlight from reaching the surface of the soil and prohibit weed seed germination. Be careful to keep the layer under three inches, as too much mulch can deprive the soil of oxygen.

Mulch also acts as a physical weed barrier. Bare dirt is the perfect place for weed seeds to land and germinate. By covering bare soil with mulch, most weeds will never even come into contact with the soil. A thick layer of mulch will also physically prevent weed seeds from sprouting. Because the mulch blocks their access to sunlight, they won’t have enough energy to push through the two inches of mulch. Also, organic mulches can actually host crickets and carabid beetles, which devour weed seeds.

Mulch adds nutrients to the soil

Organic mulches will break down over time, releasing nutrients into the soil. The addition of these nutrients will increase soil fertility.

For best results, mulch around your trees in mid-to late-spring to give the soil time to warm throughout the summer. Also, use organic mulch to make sure that your soil is receiving as many nutrients as possible.

It’s more cost-effective to purchase mulch in bulk. Use our material calculator to determine how much mulch you need.